Tom C (and his wife Donna) 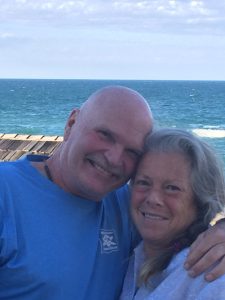 My husband Thomas at age 61, suffered a massive left brain stroke (5/12/14). We were told by the doctors that he would not survive this stroke and then when he lived beyond the predicted three days, they said “ don’t expect anything from him, he will be nonfunctional”. Boy did he prove them wrong! Although he continues to recover, he does continue to RECOVER. I mention this because there is so much misinformation about survival and recovery from stokes. Words such as neuroplasticity didn’t exist years ago when I was in nursing school. Thomas continues to struggle with expressive and receptive aphasia and apraxia. He also has right arm paralysis and short term memory deficits.

We were introduced to TAP by the rehab hospital Speech Language Pathologists. They highly encouraged us to contact TAP after discharge from the hospital. I will never forget the first weeks, months Thomas attended TAP classes. At the beginning of class the Speech Language Pathologist went around the table and had each client in the group give their name and tell the group what condition caused their aphasia. Thomas struggled for over one year and one half to be able to say his first name. He now is able to state his name, cause of aphasia and then ask questions!

It is heart breaking to watch him struggle to speak at times though his thoughts are clear as a bell. The good news here is that TAP has provided us with tools to get those thoughts out! Whether it is a gesture, drawing a picture, writing words down, pointing to an object, we eventually are able to understand what he wants or is saying. TAP provides so much support for not only the client but the family as well. It provides a safe space for the clients with varying degrees of aphasia. Thomas continues to attend TAP 3-4 times a week. I have no doubt in my mind that TAP therapists as well as clients have been instrumental in his ongoing recovery.

Maura asked for the clients to share their journey “ in their own words”. When I asked Thomas to share some of his thoughts on the subject, he said “ Everybody looks at me with love and understanding, the TAP clients and teachers ( SLP’s)”. “ I feel the same way” about them! 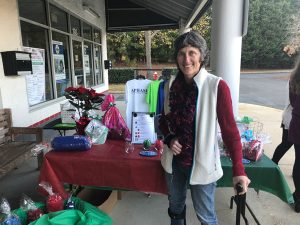 My name is Joelle Rogers and I have been attending groups at the Triangle Aphasia Project for a year and a half. I had a stroke in May 2016. When I started at TAP, I didn’t know this organization would be an essential part of my recovery.

December 17, 2017
I had the good fortune to meet Maura and to be introduced to TAP after the very unfortunate event of her mother suffering a hemorrhagic stroke. I was a covering therapist at WakeMed and had an opportunity to do a home visit with Maura and Joanie as part of